According to an old legend, it was a certain Peter Siemes of the Rhine soldier in the ranks of Charles V who brought the vines of this variety to Andalusia. Rumour has it that it was Riesling. Peter Siemes became Pedro Ximénez... Whether this legend "tastes" to you we do not know. But it is very likely that you love this Pedro Ximénez. Like all sherries by Bodega Gutiérrez-Colosía, it is distinguished by its enormous freshness. Also with this very sweet P.X. the sweetness is never exuberant, but it balances perfectly with acidity and astringency. A wide range of aromas of coffee, Sacher cake, dark fruit jam, raisins and tobacco. Creamy and viscous. A sherry that "says goodbye to the palate in slow-motion". Excellent with vanilla ice cream!

If you saw the white grapes, you would not suspect it, but white wines from Pedro Ximénez taste like liquid raisins. This variety is a genuine Andalusian. It has been known since the 17th century, and was probably named after a winery called Pedro Ximénez – the name is as common in southern Spain as Jones or Smith is to us. Its stronghold is in the Montilla-Moriles cultivation area. There, the sugar-rich grapes are traditionally dried on mats of esparto grass. Thus they lose their moisture, and the sugar concentration rises. Experts simply refer to the resulting sweet, nutty, coffee- and cocoa-spiced elixirs as PX. There is also a PX version of sherry. Nonetheless, most sherry houses do not grow the Pedro Ximénez themselves, but purchase them in Montilla-Moriles. One also seldom encounters the Pedro Ximénez as a dry white wine. Yet it does not present a great deal of profile. 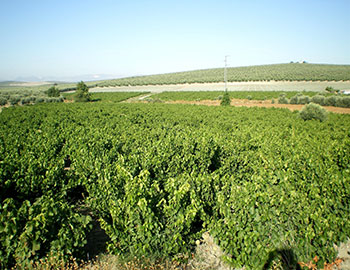