French nobility with Mediterranean charm characterize this wine of exceptional quality. As a silk fan, its bouquet opens on notes of orange flower, lavender and rose, on pomegranate, fig and dried fruits, and on forest honey, marzipan and noble wood. Its aroma richness, fine ground tannins and elegant opulence are simply enchanting. Made by a master, it’s plainly sublime!

This new bodega lies not far away from the lively city of Palma, and – we are convinced of this – will come to set new standards on Majorca.

The ingeniously simple building fits harmoniously into the gently hilly landscape. In the distance, you can see the capital, and with a clear view, even the world-famous gothic cathedral, built from vibrant golden sandstone. The equipment has been selected according to the state of the art, and leaves nothing to be desired. The required power is acquired using solar cells, and all the water used is purified under strict monitoring before being fed back into circulation. This is all the more important, as for years now, Majorca has been suffering from a water shortage.

The first vines were planted in 2007/2008. Cabernet Sauvignon, Merlot, Cabernet Franc and Petit Verdot – the classic Bordeaux varieties – are distributed across 35 different plots, occupying around 20 hectares in total. In Majorca’s warm Mediterranean climate, the slightly elevated position and differing alignment of the individual vineyards represent an advantage when it comes to pressing elegant, long-lasting wines. Cultivation is by biological and biodynamic methods, always under the utmost care.

The first commercial vintage under its own name appeared in 2014. The winemaker is no less than Patrick Léon, former oenologist at Château Mouton-Rothschild for 20 years, and adviser to the world’s most prestigious vineyards, such as Opus One or Almaviva. Under his aegis, Son Mayol’s wines have been propelled to the top class. Working by his side is Marie Barbé. She brings a wealth of international experience with her, and previously worked with Patrick Léon for a number of years.

The grapes from the various plots are vinified separately. Depending on the young wines’ characteristics, they are assembled into either Grand Vin or Premier Vin, and aged in barriques for different lengths of time. The Grand Vin is the classic, characterised by its imposing structure, complexity and long storage potential. The Premier Vin appeals thanks to its pronounced fruitiness and its lighter tannin and body structure.

Son Mayol’s logo depicts the head of an Angus cow. It all started with cattle farming. The production of the very highest quality meat, based on ecological considerations, is still an active part of Son Mayol’s business. Upon entering the bodega, every visitor is eyed up by the animals in minute detail. The cattle are not fussy eaters either, and here and there manage to feast themselves upon the sweet grapes. Another ‘important’ role at Son Mayol is fulfilled by four-legged friends. They appear on the bottles’ labels as upholders of the bottling process: The dogs Cher, Leda and Luna were responsible for the 2014 vintage. How refreshingly delightful for a bodega that will soon count among the Spanish icons. 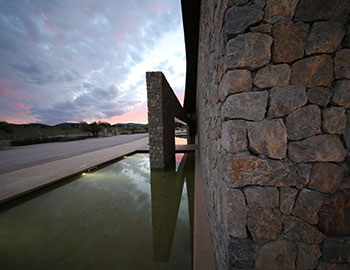 The party island is showing an entirely different, more delightful side: every year, more premium wines are produced in Mallorca. While international varieties like Chardonnay, Cabernet Sauvignon and Merlot yield excellent wines in Mallorca’s terroir, top winemakers increasingly use the best native varieties, such as Manto Negro, Callet and Prensal Blanc. The results are independent wines with Mediterranean charm and surprising freshness. 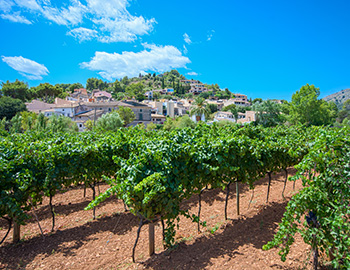